Balusters and newel posts come in a variety of different styles and sizes. Since these are the most noticeable features of your staircase, it is important to choose the balusters and newels that best match the design of your home. Select the links for balusters, newels and iron balusters to view some of the most popular items. Each wooden component is available in both a paint and stain grade finish, so your balusters and newels can be matched to your interior or they can be left to retain their natural wood appearance. Use the Woods link to view some of the most popular woods used in stairway and home design. 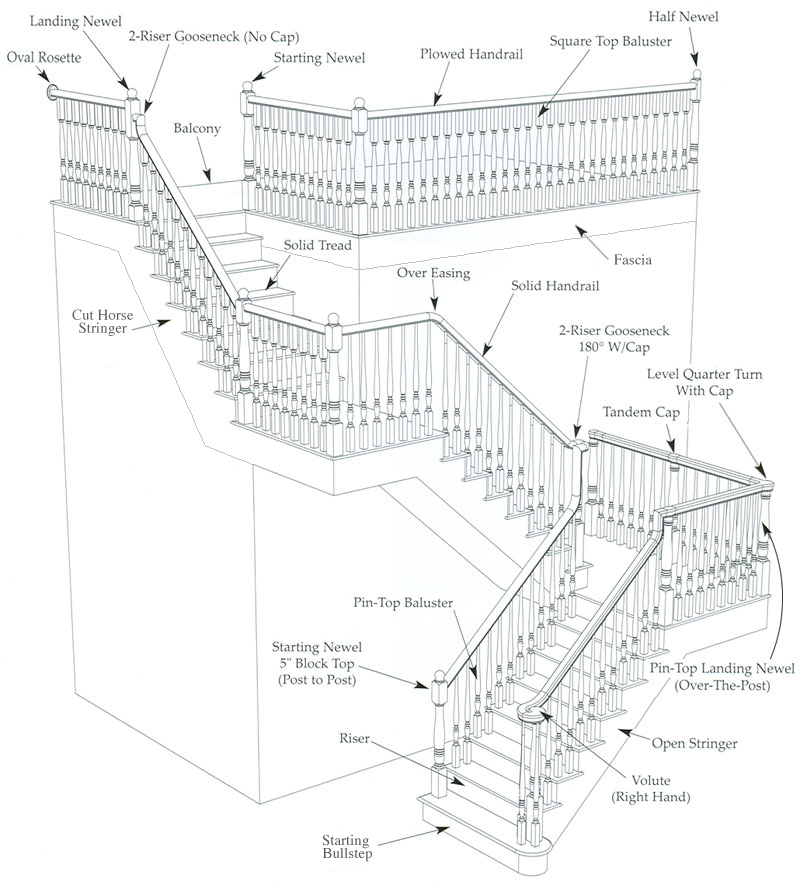 Balusters: A vertical stair part turned, carved or otherwise vertical section placed between the handrail and the stair tread or stair stringer. Balusters are typically spaced no more than 4” apart. Most balusters in wrought iron are 44” tall. Most wood balusters are 42” tall.

Balustrade: A stair system including the framework of rail, newels and balusters. The system is designed to flow together from like components.

Banister: Technically, a baluster. Practically it refers to the entire stairway system.

Brackets: Ornamental pieces used on the skirt boards and stair stringers. Several different variations exists from carved to scrolled. Typically they are thick and made from the same wood species as the rest of the stair system.

Box: Straight stairs with closed stringers as opposed to an open stairs where the tread hangs over the skirt board.

Bull nose: A rounded front to a board. Sometimes referring to the landing tread or piece of trim applied to the floor on balcony areas where the balusters are attached. Typically the radius for a bull nose is 1/2″.

Carriages: Also called stringers, cut jacks, jacks, frame, rough carriage. The angled pieces used to support the stair system. The carriage is notched for the treads to rest upon.

Cove molding: Molding placed under the treads and landing treads.

Closed Stringers: A staircase in which the ends of the treads are not visible to the outside. The opposite of closed stringers is an open stairs. Same as a box stair.

Code: The rules adopted by a state or local authorities that govern how a stairway must be built for safety reasons.

Curved: Stairs that curve as they ascend. This is a wide classification that includes several different designs.

Dogleg: A stair with two flights separated by a half landing, and having no stairwell.

Easing: The curved junctions placed in a handrail to bring the parts at different levels into one flowing curve. A fitting that curves in a vertical plane, used to change the angle of the handrail.

Epoxy: A two part adhesive used to bond materials from wood to composites to metals. Epoxies are especially useful in bonding metal to wood in stair applications. Epoxies vary in strength, setting time and elasticity once cured.

False end treads: A less expensive option when using carpet on a stair tread. False treads come in a kit with a plywood riser and plywood tread which receives a nosing that is attached to the face and the side. False end treads when covered with carpet look like solid treads and are less expensive than a solid wood tread. Often called a false tread kit.

Fillet: A thin strip that fills the plowed (grooved) rail space between balusters in a hand rail or shoe rail.

Fittings: Pieces of wood that are shaped with the same profile as handrail to form changes of direction for the handrail or to provide strength and ornamentation. Example fittings are volutes, turn outs, tandem caps, easings, and goosenecks.

Flight of stairs: An uninterrupted series of steps and stringers reaching from one landing to the next. A flight may be straight or curved.

Flitch: A log sliced into thin veneer pieces, usually 1/16″ thickness, slices are then bundled back to sell as a unit.

Flutes: Flutes are decorative vertical grooves placed in a wood surface such as a baluster or newels.

Going- run: The horizontal distance between two successive nosings. The sum of the goings of a straight flight stair is the going of the flight.

Gradient of a stair: The ratio between going (run) and riser; the angle of inclination.

Guardrail: A protective railing designed to prevent people or objects from falling into an open well, stairwell or other open spaces.

Glue blocks: Blocks of wood attached to the underside of a stair at the junction of the riser and tread. Glue blocks secure the treads and risers together and are used to prevent movement which causes squeaks.

Gooseneck: A combination of an easing and a fitting in a rail system which allows the handrail to change heights from an incline back to the level. Placed at landings or at the top of a stair.

Handing: The direction a stair part is designed to be used. Handing is right or left. Handing is determined by standing at the bottom of the stairs and looking up.

Handrail: A molded or milled rail following the pitch or rake of the staircase and forming the top or connecting piece of the balustrade which protects the outside of the stair.

Horse: The stringer for the staircase usually notched.

Jack: A shortened term for stringer or supporting member of the staircase.

Landing: A resting place, or wide step at the middle or top of a flight of stairs. Landings are often used to change the direction of a stair.

Margin: A reveal; the distance between the nosing and the top of a closed stringer.

Mop stick handrail: A handrail that is circular in cross-section except for a small flat surface underneath.

Newels or newel post: A solid rectangular, or circular section of vertical post at the center and at regular turns and junctions of a rail system. The newels provide the main support for the rail system. There is a starting newel at the base of the stairs and a landing newel at the turns or top of the stair. Other newels are described as; center turned newel, box newel, and pin top newel.

Nosing: The front edge of the tread which projects beyond the face of the riser. It is usually rounded, chamfered or sometimes shaped.

Open Risers: A staircase designed with only the horizontal surfaces of the treads fixed to the stair stringers. Vertical surfaces between treads are open. This type of stair system does not meet most code requirements. If the riser space is less than 4” then it will meet some code requirements.

Open stair: A stair that is open or without a wall on one or both sides.

Open Stringer: A stringer or skirt board that is cut out for the treads and risers. Typically the tread will have a return that hangs over the skirt board to finish the look.

Opening cap: A fitting or portion of the rail system which begins with a round cap and is connected to the handrail.

Open well stair: A stair with two or more flights around an open space.

Pitch: The angle of a stairway expressed in angular degrees or in rise over run.

Plowed rail: A hand rail which has had the bottom grooved or plowed to accommodate a square top baluster. Fillet are used to fill the space between balusters.

Rail system: The balustrade. Used to describe a complete rail system consisting of the handrail, newels, fittings and balusters.

Rake: Describes the angled part of a stairway as opposed to a balcony.

Ramp: A vertical curved easing in a handrail.

Rise: The vertical distance between the upper surfaces of two consecutive treads.

Risers: The vertical face of a step.

Shoe rail: A plowed rail that is used to accept the bottom end of square balusters. The shoe rail often sits on a short wall or it may float above the treads.

Soffit: The visible sloping under-surface between the stair stringers.

Spindles: The balusters or turned, carved or otherwise vertical sections placed between the handrail and the stair tread or stair stringer.

Spiral Stairs: Stairs which rise regularly around a cylinder or elongated cylinder either real or imaginary. Sometimes called helical stairs.

Step: One unit of a stair, consisting of a riser and a tread. A stair is a series of steps.

Starting tread (step): The first tread and riser at the bottom of the stair. Starting steps are usually rounded on the ends to accept volutes or turn outs.

Stairway: a staircase, or a stairwell.

Stairwell: The framed opening in the floor that incorporates the stairs.

Stringer: Also called carriages or cut jacks. The inclined boards or laminations in which the treads and risers are attached. Stringers provide the support for the stairs.

Tandem cap: A fitting that matches the handrail profile with a round enlarged portion in the middle designed to accommodate a newel.

Treads: The horizontal part of a staircase upon which the foot is placed.

Turn out: A fitting used to start a rail system. The turn out flares left or right slightly to give the appearance that the stairway is enlarged and inviting.

Volutes: Also called wreath. A decorative way to start a stairway. The volute is round with a newel in the center surrounded by balusters and ascending to the rake of the handrail.

Wall Rail: Used where a stair runs alongside a wall and is attached to the wall with rail brackets.

Walk line: An arbitrary line; but generally 12″ from the inside radius of a curved stair where the minimum tread length is met. The walk line is used in code determination for stairs with a tight radius.

Wedges: Ramp type pieces of wood used in the construction of closed staircases to help secure treads and risers.

Winders: Treads that are narrower at one end than the other. Used to turn corners or go around curves.